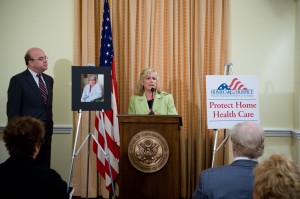 As the “debate” continues in Washington over the debt ceiling and capping government spending, home care nurses added their voices to those speaking against propoals that would cut Medicare funding and impose co-payments. What is at stake are proposals by:  1) The National Commission on Fiscal Responsibility and Reform that would impose a uniform 20 percent co-pay and a uniform overall deductible of $550 for all Medicare services combined, including home health care;  or 2) the Medicare Payment Advisory Commission (MedPAC) which recommended a home health copay (as much as $150 per episode) for episodes not preceded by a hospital or nursing home stay as a means to encourage beneficiaries to control utilization of care.

Congressman James P McGovern (D-MA) a long time champion of home care spoke to the nurses saying:  “It is important that members of Congress understand that you are part of the solution,” McGovern said. McGovern said that keeping a person at home is cheaper and patients are ultimately happier.

To send a message to Congress to keep home care cuts out of debt ceiling discussions, go to the Alliance’s advocacy page.

Pat Kelleher is Executive Director of the Home Care Alliance of Massachusetts. View all posts by Pat Kelleher

4 thoughts on “Home Care Nurses Speak Up in Washington”